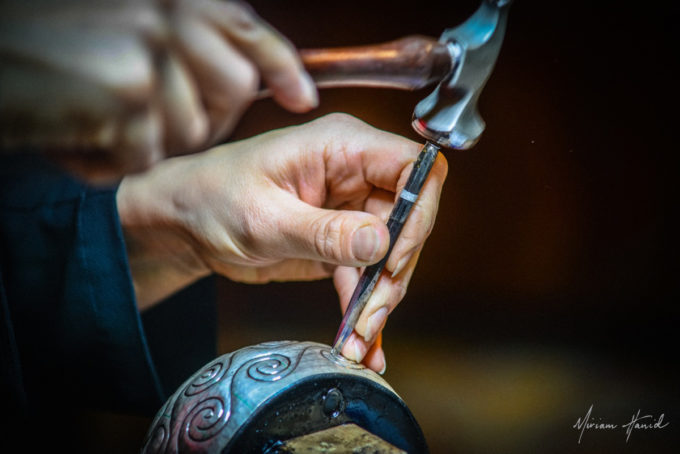 Earlier in 2019 I started work on a new silver commission, a tall two-handled Loving Cup and cover for the Clothworkers’ Livery Company, one of the twelve great livery companies of London. The Clothworkers’ are commissioning two new cups in commemoration of two significant milestones, the first female Master in 2018 – fittingly in this anniversary year of female suffrage – and the second to celebrate their 500th Master in 2019. The cups are to be used at their livery dinners as part of the Loving Cup Ceremony, detailed below:

“Clothworker Livery Dinners have included a Loving Cup ceremony since at least 1808. Cups are passed around the table with each guest drinking to his neighbour. When the guest about to drink stands up, those on either side of him also rise. The guest on one side stands with his back to the one who is about to drink, so as to protect him from attack. The drinker and the guest on his other side bow to each other, the second guest removes the cover, the drinker drinks, and wipes the rim of the cup with a napkin provided, and the second guest replaces the cover and the two bow to each other again. The same procedure is then repeated around the table.”

In order to inspire some initial designs for the loving cup, I interviewed Carolyn Boulter, the first female Master of the Company, to get a sense of how the year was for her. I was particularly inspired by her enthusiasm when I asked her if there were any visual themes or symbols which came up during her year as Master:

“The Clothworkers’ is like a great oak tree, roots in tradition, branches through the generations holding up the new leaves, our new members, who give life and capture energy for the organisation.”

Also a quote from Carolyn about collaboration is worth noting as I will elaborate on it in part two of this blog post (to be released later in the year):

“We are, in this generation, painting a new collaborative work of art.”

I very much liked Carolyn’s comparison of a great oak and it inspired me to explore oak leaves on a backdrop of flowing cloth within my initial chased design concept. However on reflection and following subsequent meetings with the Clothworkers’ I felt it was a little too tangible and appeared rather traditional in style. I was given complete freedom by the Clothworkers’ Committee to explore what I felt to be visually appealing within the realms of chasing, with a focus on a concept that I would be both proud of and happy to work on. So I decided to put the emphasis on slightly more abstract flowing and draped cloth and flax threads which in my final design make up a montage of cascading fabric and textures that swirl round the form of the loving cup. This connects with the history and ethos of the Company which continues to support various crafts linked to textiles including weaving, as well as with the conceptual feel behind my other works.

This prototype piece which I made in January 2019, Cascade Tumbler, shows the chasing style I will be using within the final piece.

As part of London Craft Week in May 2019 I was thrilled to have the opportunity to demonstrate the silversmithing techniques I use – chasing and engraving – at Clothworkers’ Hall, London. Angela Cork, the chair of Contemporary British Silversmiths – the UK’s leading organisation for championing current works handcrafted in silver – also asked me to take part in a talk about the Clothworkers’ Silver Collection and the two new Loving Cup commissions with Yusuke Yamamoto, who is making the second one. This event took place in their impressive livery Hall and also featured The Clothworkers’ senior archivist Jessica Collins.

I was fortunate enough to have some of my work photographed alongside some of the bespoke books hand crafted by specialist bookbinders which were commissioned by the Clothworkers’ and are displayed in their distinct Art Deco Entrance Hall.

The Cascade Loving Cup is progressing well. The finished piece is due to be completed in October 2019 and I will publish a second blog highlighting the process and the end result. In the meantime please visit my Instagram and Facebook pages for work in progress images as and when I post them.

Please visit the gallery below for a selection of images taken at Clothworkers’ Hall as part of London Craft Week in partnership with Contemporary British Silversmiths.

For information about current and future events, please visit the exhibitions page. You might also be interested in learning more about my two signature techniques – chasing and engraving if you aren’t yet familiar with them.

Many thanks to John Andrew, curator of the Pearson Silver Collection for bringing the silver engraved box that he commissioned featuring his cat Pixie, Emma Boden from Armadillo Central for styling the bookbinding pictures and some of the other images and Andrew Florides and Kate Darkins for sharing their wonderful images.