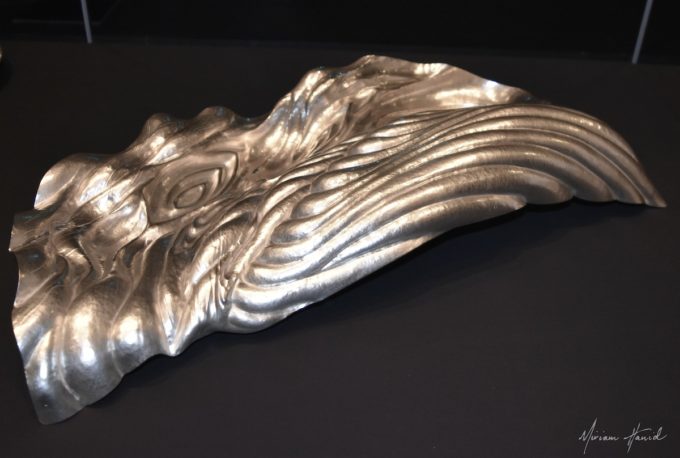 “Silver is a seductive, glamorous material and the centrepiece is one of its most wondrous uses.

Showstoppers at Temple Newsam, Leeds took two iconic centrepieces from our historic silver collection and presented them alongside contemporary masterpieces by artists Junko Mori and Miriam Hanid. The exhibition showcased the continuation and reinvention of traditional silversmithing techniques and celebrated women in silver, as makers and owners.” – Rachel Conroy

I love to explore different facets of the rich history of silver! In summer 2016 I was thrilled to learn that Rachel Conroy, the new curator of Temple Newsam, Leeds, wanted to showcase my chased Deluge Centrepiece for the exhibition Showstoppers: Silver Centrepieces at the historic house in 2017.

Watch the video about the making of a similar, smaller piece entitled Deluge below – filmed at Temple Newsam in 2017.

A painting in metal
The Deluge Centrepiece is one of the largest pieces I have made to date. I really enjoy working on such a large scale as it means I can create with volume, sculpting the silver boldly. I also love to witness the rapid transformation from a flat sheet of silver to something with wild movement within it, capturing energy and form.

See the gallery below for some images of the making process of Deluge.

Deluge – being a decorative and sculptural centrepiece rather than for a specific purpose – evokes the movement of the sea, using chasing and repoussé to create undulating waves and flowing forms. As research I studied waves and did sketches and drawings to understand their dynamics. Given that water is a constant source of inspiration in my work, this research material has grown significantly over years of observation, exploration and documentation in various forms. I have witnessed how different conditions such as wind, the space around the water, its volume and the effects of light shining on and through it create different effects. These factors can have powerful repercussions transforming water into illusions of molten metal, glass, silk and even mud as well as mirroring sky, mountains, vegetation, and moonlight.

This approach to design is markedly different to the manner in which two functional historic centrepieces, also present in the exhibition, were created – Thomas Pitts’ Chinoiserie Epergne, and the Kirkleatham Centrepiece by David Willaume II (1693-1761) and Anne Tanqueray (1691-1733).

Filming in a Historic House
I went to Temple Newsam in February 2017 to demonstrate my signature technique of chasing and repoussé for some filming for the three digital display labels for the exhibition – instead of printed cards alongside the display pieces, there were ipads showing videos about the works in the exhibition. I also talked about the historic pieces in the exhibition, looking more closely at how they were made and what they might have been used for.

Click below to watch the video about the Chinoiserie Epergne or click to watch the same video on Youtube and see the informative caption written by Jane Ewart Singleton.

I found it fascinating to learn how the act of dining and its rituals have changed since the 18th Century. The Chinoiserie Epergne and the Kirkleatham centrepiece would both have been used in the evenings, when servants might have been dismissed and dinner parties carried on late into the night. The many baskets would have held fruits and sweetmeats, while a neat storage solution was found for the vinegar and oil pourers in their cleverly designed integral compartments. This style of self-service became more popular in affluent circles after the start of the 18th Century, when rooms dedicated to dining were more commonplace.

Click below to watch the video about the Kirkleatham Centrepiece or click to watch the same video on Youtube and see the informative caption written by Jane Ewart Singleton.

For information on how to bring your idea to life in a bespoke silver piece visit the commissions page. Or sign up to my mailing list on this page to keep informed about new shows and silver pieces that I’m currently working on. See the Exhibitions page for a public event at The Victoria and Albert Museum called ‘Women in Silver’ at which I will be demonstrating Hand Engraving and Chasing