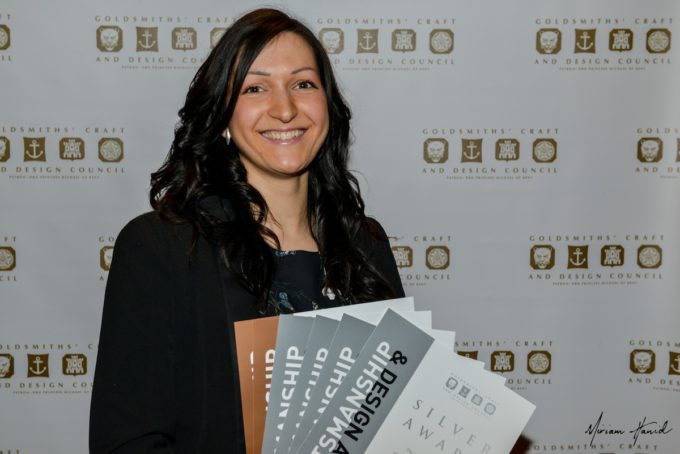 “The Goldsmiths’ Craft and Design Council is an industry body that promotes the highest standard in design and craftsmanship within the jewellery industry and allied crafts. As part of the promotion of excellence in silversmithing, jewellery and the allied crafts, the Council runs the annual Craftsmanship & Design Awards.” The Awards ceremony is held in the grand setting of Goldsmiths Hall, London. It’s always a pleasure to see the exquisite award winning pieces of silver, jewellery and diamond work on display. As I often work on a large scale it’s also exciting to view up close the intricacy in pieces which are sometimes smaller than a hammer head!

“These awards have helped to launch the careers of many eminent craftspeople in the industry and are the only peer reviewed awards in the industry’s calendar. Fondly known as the ‘Oscars of the Industry’ they reward outstanding technical skill and design ability. The Awards are open to anyone in the United Kingdom engaged in designing or working with precious metals, gemstones and other allied materials. ” – The Goldsmiths Craft and Design Council.

In recent years I have been limited with the pieces I could enter into this competition for a number of reasons – mostly because commissions go to their respective owners and to borrow them back for the weeks surrounding the competition is not always convenient or possible. Sometimes institutions and clients are able to kindly lend items back. Fortunately this year I was able to enter the following four pieces, one of which – the Cascade Jug – was on loan from The Goldsmiths Company, who commissioned it for their Modern Collection.

I was thrilled when the Cascade Jug won a silver award in both the silversmithing and chasing categories. The technical problems I ran into when making this jug were at times heartbreaking (and also very expensive!), so it’s particularly encouraging to have this piece recognised! I made multiple models of the handle and after trying different methods of fabricating it, I found that the fitting and blending in of the handle to the rest of the jug was quite a challenge. With thoughtful advice and practical support from other experienced silversmiths such as Rod Kelly and James Butler, I did however learn lots of new skills and was also able to improve existing ones. This helped to transform the final piece into an accurate and functional realisation of my original design concept.

In the silversmithing section, entries “are judged primarily on excellence of technical ability and craft skills, but creative interpretation and presentation are also taken into consideration.” –  The Goldsmiths Craft and Design Council.

The chasing on the Cascade Jug was mainly achieved using large signature tools which I make myself. The bold lines fade into thin sharp lines with the use of punches in varying widths. Chasing on the curved profile of the jug involved adjusting the angle of the punch and hammer across almost every centimetre of the design, especially as the flowing lines spiralled around the curves rather than following the easy option of travelling straight up and down or across the curves. I’m grateful that this chasing technique has been recognised via a silver award in the Chasers’ Senior Section.

The Radiance tray, which also won an award, is actually a test piece for a larger centrepiece which I’m making for The Goldsmiths Company’s Modern Collection. In order to illustrate the type of chasing which would envelop the whole dish, I decided to create a sample to enable the Modern Collection Committee to view the finished effect alongside the designs. As the chasing and repoussé makes up the form of the piece, no additional raising or forming was needed, leaving the artistic theme to lead the structure of the design. Using deep chased lines combined with finer details, Radiance won a silver award in the Chasers Senior category and a silver award in the 3D pieces Design category. You can see the details of the chasing on the front and reverse in the gallery below.

I entered another piece into the competition, the Birch Leaf Beaker, which received a bronze award for chasing. Although it appears to be a deceptively simple design, to achieve consistency throughout all the lines required stamina, focus, and endurance. I really enjoyed chasing this piece and loved seeing the imprint of the lines on the interior of the cup, which is always a nice surprise to discover upon emptying the vessel of pitch.

The Birds In Flight Vase – Britannia silver, also won a bronze award for chasing, and with this piece I have combined the effect of chasing as well as hammer and chisel engraving to create different depths in the landscape of sea, birds and sky. I love the way that engraving highlights particular areas of the silver to bring it forward and make it more visible, glinting while catching the light.

To find out more about my signature technique of chasing, visit the chasing page or read and see more about engraving. You might also like to see other works in the gallery or view upcoming exhibitions for this year.